June 30, 2015
Kawasaki, Japan/Lisbon, Portugal – Mitsubishi Fuso Truck and Bus Corporation (MFTBC), one of Asia’s leading commercial vehicle manufacturers, cooperating with Daimler India Commercial Vehicles Pvt. Ltd. (DICV) under the umbrella of Daimler Trucks Asia, today announced that the trials for its battery-powered, electric, “Zero Emission” vehicle were officially completed in Portugal, one year after the hand-over of Fuso Canter E-CELL trucks to selected customers. At an event held in Lisbon, the Deputy Prime Minister of Portugal, Paulo Portas, representatives of government authorities, customers, and the management of Mitsubishi Fuso Truck Europe and Daimler Trucks, all responded positively to the real-life performance of the trucks.
“The Mitsubishi Fuso Canter E-CELL project is a great example of innovation and collaboration between the Portuguese government, its agencies, Mitsubishi Fuso and Daimler Trucks”, said Marc Llistosella, President and CEO of MFTBC and Head of Daimler Trucks Asia.
The Portuguese government co-funded the research project through IAPMEI, the Public Agency for Competitiveness and Innovation. The Fuso Canter E-Cell vehicles were produced at the Tramagal plant, located about 150 kilometers northeast of Lisbon, where also MFTBC produces the Canter Eco Hybrid since 2012.
“The vehicle underlines our commitment to thinking ahead and developing sustainable and reliable transportation solutions to the benefit of our customers and society as a whole. The results of the trials prove that we are on the right track. The customers in the test trial experienced the Canter E-CELL as an efficient and reliable concept fully meeting the demands of urban delivery transport”, Llistosella added.
Within Daimler Trucks, MFTBC is at the center of competence for hybrid technology. Based on this experience, the Daimler subsidiary has also been responsible for developing the Fuso Canter E-CELL.
Customers used vehicles for a wide range of purposes
The first findings from trials with eight vehicles, indicate the trucks proved adequate for everyday use in short range delivery and inner city transportation. The trucks achieved a range of more than 100 kilometers, thus exceeding the average distance many short-radius distribution trucks usually travel in a day. The Fuso Canter E-CELL reached a payload of two tonnes, an amount necessary for customers to operate their fleet efficiently. At the same time, preliminary analysis points to cost savings of about 1,000€ per 10,000 km compared to conventional diesel trucks.
The capabilities of these electrically-powered light-duty trucks were put to the test under a wide range of conditions. The city of Lisbon used the Canter E-CELL for horticultural and waste disposal purposes, the city of Porto as a means of collecting recyclable waste, the city of Sintra for forest maintenance, and the cities of Abrantes and Cascais, also, in the field of horticulture. The company Transporta used the vehicle for house-to-house deliveries as part of its short-radius distribution service, and the energy supplier REN used it for transport purposes within industrial gas storage facilities located in the cities of Sines and Pombal. Lastly, the Canter E-CELL helped the Portuguese national postal service, CTT, with transport runs between its distribution centers in the cities of Lisbon and Coimbra. 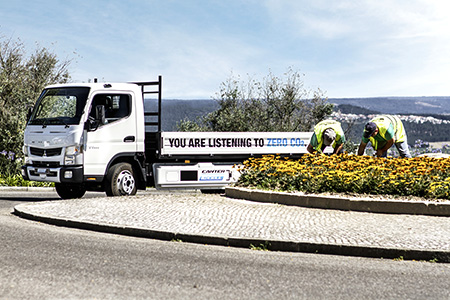 ‘Zero Emission’ Canter E-CELL
About MFTBC
Based in Kawasaki, Japan, Mitsubishi Fuso Truck and Bus Corporation (MFTBC) is one of Asia’s leading commercial vehicle manufacturers. In 2014, the company sold a total of about 174,595 vehicles including light-, medium- and heavy-duty trucks and buses, a 1.7% increase over the previous year. Daimler AG owns 89.29% of MFTBC shares and various Mitsubishi group companies own 10.71% of MFTBC shares. MFTBC is an integral part of the Daimler Trucks Division of Daimler AG.