March 7, 2017
Kawasaki, Japan – Mitsubishi Fuso Truck and Bus Corporation (MFTBC) will supply 502 units of its FUSO vehicles to its Japanese business partners for Ugandan infrastructure projects by the Uganda Ministry of Works and Transport.
Uganda is among the fastest-growing countries in Africa, with a GDP growth rate of five percent. The agricultural country is seeing the continuous development of infrastructure, especially roads, already extending around 130,000 kilometers across the country. This time the Ugandan government will improve roadways covering 112 districts nationwide with the aim of increasing the efficiency of transporting agricultural products. These roadways are especially essential for the east African nation to transport agricultural products whose sector contributed about 30% to the GDP. FUSO will supply its construction vehicles for the project, meeting the requirements for local infrastructure use.
A trade deal including the vehicles was agreed between Sumitomo Corporation and the Uganda Ministry of Works and Transport in September, 2015. FUSO will deliver its chassis to Kyokuto Kaihatsu Kogyo Co., Ltd. and six other body building companies. They will complete FUSO’s light-duty Canter for usage for mobile workshops, medium-duty Fighter with tippers, asphalt distributors, water tankers and cargo cranes, and heavy-duty Super Great with loaders and trailers.
The construction vehicles will be serviced by FUSO’s authorized distributor, Spear Motors Ltd., which has been in relationship with FUSO since 2013.
FUSO will continue to enhance its business activities to contribute to the development of fast-growing countries through supplying vehicles for infrastructure projects. 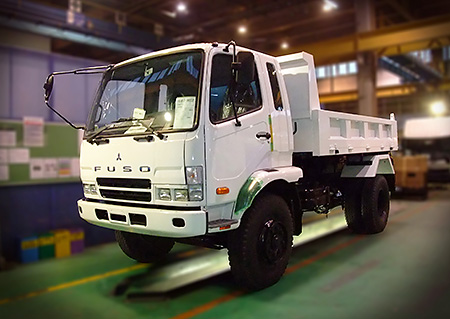 FUSO at a Glance
FUSO is one of the brands of Daimler Trucks, present in nearly all regions around the world including; Asia, Africa, Latin America, Europe and the Middle East. FUSO’s light-duty to heavy-duty trucks (GVW 3.5–49 tons), vans, industrial engines, and buses are sold in more than 160 markets. The Fuso brand is based on four core brand values; Trusted Quality, Economic Efficiency, Solid & Functional Design, and Committed Services.
MFTBC at a Glance
Based in Kawasaki, Japan, Mitsubishi Fuso Truck and Bus Corporation, (MFTBC) is one of Asia’s leading commercial vehicle manufacturers. In 2015, the company sold a total of about 154,200 vehicles including light, medium, and heavy-duty trucks and buses under the Fuso brand. Together 89.29% of its shares are owned by Daimler AG, and 10.71% by various Mitsubishi group companies. MFTBC is an integral part of the Daimler Trucks division of Daimler AG.