March 16, 2017
Kawasaki: Mitsubishi Fuso Truck and Bus Corporation (MFTBC) achieved a cumulative sales milestone of one million light-duty Canter trucks, known as Colt Diesel in Indonesia, since it began selling in 1975.
FUSO is the first commercial vehicle brand that has achieved this milestone with a single model in a single market. Colt Diesel vehicles started to be sold in1975 when the demand for transportation increased, and the Indonesian government started to promote automotive business in Indonesia. In the same year, the vehicles started to be assembled locally. The Indonesian business for the Fuso brand has been managed by PT Krama Yudha Tiga Berlian Motors (KTB), MFTBC’s general distribution partner, who has been exceptionally successful in the market for more than forty-seven years.
Mr. Michael Kamper, Senior Vice President and Head of Marketing, Sales and Customer Services Trucks Asia, said: “46 years of our hard work have led to an undisputed leadership in the Indonesian light-duty truck market. For both Daimler Trucks Asia as well as our JV partner KTB this is a genuine accomplishment and long term success story. We will be further strengthening the relationship between KTB and us.”
At the ceremony event held on March 10 in Jakarta, Mr. Kay-Wolf Ahlden, Head of Daimler CV Regional Centre Southeast Asia, delivered his ceremonial speech: “This milestone could not be reached without the trust of our valued customers, the support of our professional sales partners, and the support of the Indonesian economy and government. Everywhere you go in this country you can see small but strong yellow trucks, working hard, day and night, to grow and build this country.”
Mr. Atsushi Kurita, Director of KTB, said: “This remarkable achievement in the history of commercial vehicle in Indonesia was only made possible because the Indonesian society accepted our Colt Diesel. I hope that this historical achievement will further strengthen foundation of Mitsubishi Fuso presence in Indonesia, so our product can contribute to support developing the Indonesian country.”
At the event, KTB also revealed the new brand ambassador for Mitsubishi Fuso – Mr. Iwan Fals – a legendary musician and Indonesian Hero, who will be promoting the Fuso brand for the upcoming year.
FUSO has been the market leader in Indonesia for forty-six consecutive years since its entry into the market in 1970 and the start of vehicle sales the following year. Colt Diesel – an icon of Indonesia – has a 55% market share in the light-duty segment making it the highest volume light-duty truck in the market in 2016. This is the result of a strong relationship between FUSO’s General Distributor KTB and MFTBC, to customize the most suitable products and provide the most dedicated customer services.
In 2016 MFTBC made an agreement with Mitsubishi Corporation, Mitsubishi Motors Corporation (MMC) and PT Krama Yudha to increase its shareholding in KTB from 18% to 30%, as Indonesia is FUSO’s largest market and as such one of its most important export markets. FUSO continues to see growth potential in the commercial vehicle market in Indonesia. 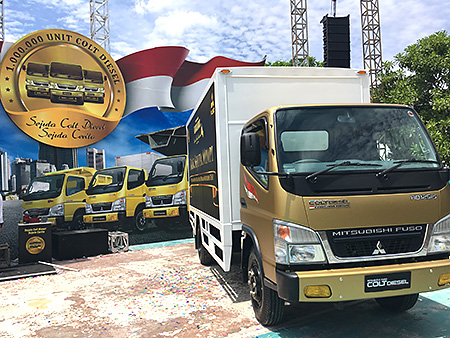 One millionth Limited Edition
FUSO at a Glance
FUSO is one of the brands of Daimler Trucks, present in nearly all regions around the world including; Asia, Africa, Latin America, Europe and the Middle East. FUSO’s light-duty to heavy-duty trucks (GVW 3.5–49 tons), vans, industrial engines, and buses are sold in more than 160 markets. The Fuso brand is based on four core brand values; Trusted Quality, Economic Efficiency, Solid & Functional Design, and Committed Services.
MFTBC at a Glance
Based in Kawasaki, Japan, Mitsubishi Fuso Truck and Bus Corporation, (MFTBC) is one of Asia’s leading commercial vehicle manufacturers. In 2015, the company sold a total of about 154,200 vehicles including light, medium, and heavy-duty trucks and buses under the Fuso brand. Together 89.29% of its shares are owned by Daimler AG, and 10.71% by various Mitsubishi group companies. MFTBC is an integral part of the Daimler Trucks division of Daimler AG.