Mitsubishi Fuso   the frontrunner in electric trucks   hands over its series-produced all-electric truck “eCanter” to its first customers; Seven-Eleven and Yamato Transport

The eCanter is the first all-electric light-duty truck in series-production by a global manufacturer. The truck made its worldwide debut last month in New York City, and is being leased initially in a small series-production in Japan, Europe and the US. Today’s handover ceremonies mark the first worldwide delivery of FUSO’s eCanter into customer hands.

Kazuo Matsunaga, Chairman of MFTBC & DTA stated, “In times of rapid urbanization, manufacturers, forward thinking customers, and municipalities have to cooperate in order to lower greenhouse gas emissions and make cities greener and quieter. FUSO has taken the leadership role in the electrification of trucks, and is very happy to hand over these first eCanter to its customers today.”

He added: “We are grateful we could convince such iconic and forward thinking companies like Seven-Eleven and Yamato, to become the first customers to receive the eCanter and operate it in their fleets, setting a benchmark for corporate citizenship”. Handover of eCanter to Seven-Eleven in front of media

The handover ceremonies were held at Seven-Eleven’s Chilled Hino Center (Hino City, Tokyo) and Yamato Transport’s Haneda Chronogate (Ota Ward, Tokyo). Seven-Eleven will gradually start to operate the eCanter in eight of their centers in Tokyo, Kanagawa, Saitama and Chiba. Seven-Eleven is committed to reduce the burden on the environment by optimizing their distribution systems. Yamato Transport also plans to use the eCanter for its transport operations in the Kanto region to contribute to a sustainable urban environment. Seiichi Awa, Managing Director of Yamato, said: “As the largest logistics company in Japan, trucks are at the heart of our company. We are excited to be the first to integrate the electric eCanter into our operations and make deliveries emission-free. We believe electric trucks are the future of urban delivery.”

The FUSO eCanter is a light-duty truck that emits zero local emissions and zero engine noise. This enables businesses to have deliveries, even in dense neighborhoods, in early morning hours and late into the night. It is also a positive business case, as customer fleet tests have shown that the electric eCanter can save up to approximately 1000 Euro per10.000 kilometers in operating costs. The electric truck has a GVW of 7.5 tons, carries 6 lithium-ion battery packs and offers a range of roughly100km on a single charge. Charging takes around 1.5 hours (DC quick-charging system) and 11 hours with a regular system (200 V). The body comes in various configurations such as box body and flatbed. MFTBC has a long history and experience in alternative drivetrains. Since 2005, we are manufacturing and selling the Canter Eco Hybrid. In 2010, we presented the first prototype of our all-electric light-duty truck “E-CELL”. 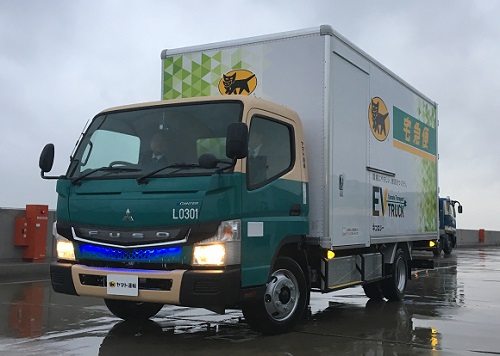 eCanter handed over to Yamato Transport