Mitsubishi Fuso Truck and Bus Corporation (MFTBC; headquarters: Kawasaki City, Kanagawa Prefecture; President and CEO Hartmut Schick), announces the inauguration of a new 3S facility in Bangladesh. The product lineup will also be expanded with the addition of the Rosa, Canter, and the start of KD operations for the BM Bus Chassis under local business partner Rancon Trucks and Buses Limited (RTBL).

RTBL is unveiling its second FUSO sales location in Bangladesh at Chattogram. The city is a logistics hub containing the Port of Chattogram, one of the main seaports of the region that processes most of Bangladesh’s export-import activities. Last year, RTBL inaugurated a newly built sales facility in Tejgaon, Dhaka. The new customer touchpoint will allow RTBL to further accelerate sales efforts of FUSO products within the country.

At the opening event, RTBL showcased the FUSO BM Bus Chassis, a future addition to the product offering in Bangladesh. RTBL is assembling the chassis for the Bangladeshi market at a KD production facility located in the Bhabanipur area near Dhaka, and will start sales of the vehicle early next year. With the bus chassis, MFTBC and RTBL aim to match the customer demand for quality heavy-duty buses in Bangladesh’s urban centers. Bus transit currently accounts for the majority of public transportation usage in Dhaka, which is one of the fastest-growing cities in the world.

RTBL also displayed the Rosa light-duty bus and Canter light-duty truck on the occasion of the inauguration. The two vehicles were brought to the market earlier this year in August through the Dhaka branch, and will now be available to customers in southern Bangladesh. Both of these products are shipped as BU vehicles from Japan. The introduction of the Rosa, Canter, and BM bus compliments the existing range of medium-duty FA and FI, and heavy-duty FJ and FZ models, ensuring a full range of Fuso trucks and buses for the Bangladeshi market.

As the sole authorized general distributor in Bangladesh, RTBL has been responsible for the importation and wholesale of FUSO brand trucks and buses since 2018. RTBL deals exclusively with FUSO products within the commercial vehicles business. The company is part of the Rancon Group, which also deals in passenger cars, motorcycles, consumer electronics, and real estate, among other areas of industry.

Pushed by a booming garment export industry, public investments, and rising domestic consumption, Bangladesh has been one of the fastest-growing economies in recent years. According to the World Bank’s projections for FY2019, its GDP growth rate is expected to be among the top five in the world. MFTBC sees high potential in the Bangladeshi market, and has been investing into the FUSO brand’s expansion accordingly. 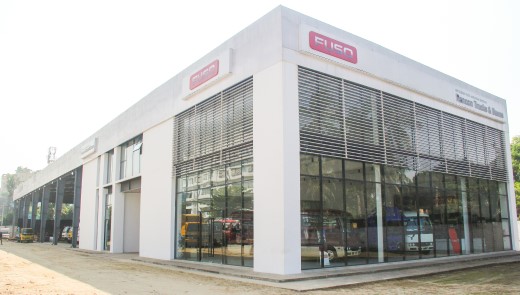 Exterior of new facility in Chattogram

MFTBC at a Glance
Based in Kawasaki, Japan, Mitsubishi Fuso Truck and Bus Corporation (MFTBC) is one of Asia’s leading commercial vehicle manufacturers. MFTBC sells light, medium, and heavy-duty trucks and buses under the FUSO brand, with 89.29% of its shares owned by Daimler Truck AG and 10.71% by various Mitsubishi group companies. MFTBC is an integral part of the Daimler Group’s global truck and bus business.

Daimler Trucks Asia at a Glance
Daimler Trucks Asia (DTA) is an organizational unit that jointly operates Mitsubishi Fuso Truck and Bus Corporation (MFTBC) – an icon of the Japanese commercial vehicle industry with more than 80 years of history – and Daimler India Commercial Vehicles (DICV), a young challenger in the Indian market. DTA has a strategic business model that allows its group entities to collaborate in product development, production, exports, sourcing and research activity to provide the best of value products.