January 28, 2015
Kawasaki, Japan – Mitsubishi Fuso Truck and Bus Corporation (MFTBC), one of Asia’s leading commercial vehicle manufacturers, today announced it won the “Prize of ECCJ (The Energy Conservation Center Japan) Chairman” in the “2014 Energy Conservation Grand Prize”  Examples category for its energy saving activities at its 194 truck and bus sales and service outlets nationwide.
The Grand Prize for Excellence in Energy Efficiency and Conservation, sponsored by Energy Conservation Center Japan, recognizes excellence in energy conservation efforts and advanced energy-saving products which contribute to promoting energy-saving awareness and the wider application of energy-efficient products.
MFTBC has won the “Energy Conservation Grand Prize” for the second consecutive year. In 2013, the world’s most fuel-efficient Canter Eco Hybrid truck won the “Prize of Director General of Agency for Natural Resources and Energy” in the “2013 Energy Conservation Grand Prize” in the Product and Business Model category. The company was also awarded with the same Prize in the Energy Conservation Examples category for its “overall CO2 reduction in the supply chain”, which makes the company the first in industry to win awards in these two categories.
On the occasion of winning the award, Mr. Akio Suehiro, MFTBC Senior Vice President of Mitsubishi Fuso Sales Japan, said:
“We are very pleased that we have won the prestigious award for the second year in a row. We have made the company-wide efforts to promote the activities of ‘Leader in Green Innovation’ in FUSO 2015, the company’s five-pillar growth strategy for the future introduced in October 2011. The activities recognized this time have been achieved because each one of 6,000 employees at 194 sales outlets have increased their awareness of energy saving. Further, they could not have been made possible without the cooperation of our business partners involved. We want to take this opportunity to express our appreciation for them. MFTBC has been and keeps committed to developing innovative products and eco-friendly solutions.”
MFTBC directly operates a network of 194 sales and service outlets nation-wide, where approximately 6,000 employees are working. At all these outlets, the Energy Management System (EMS), LED lightings and solar power generation system have been installed with the target to achieve reduction of total electricity usage by 5% compared to 2010. With the promotional activities including the “Power Saving Contest”, MFTBC has achieved a12% reduction nationwide in the electric power consumption rate (=electric power usage divided by maintenance sales) from 2011 to 2013. 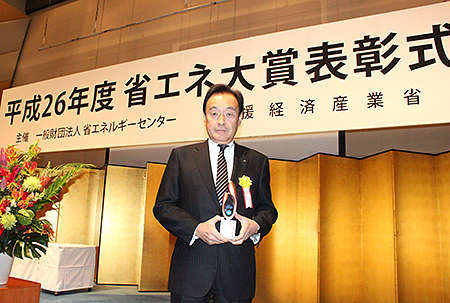 Mr. Akio Suehiro, MFTBC Senior Vice President of Mitsubishi Fuso Sales Japan
MFTBC’s Past Winning of the “Grand Prize for Excellence in Energy Efficiency and Conservation”:
2008
2013
About MFTBC
Based in Kawasaki, Japan, Mitsubishi Fuso Truck and Bus Corporation (MFTBC) is one of Asia’s leading commercial vehicle manufacturers. In 2013, the company sold a total of about 172,400 vehicles including light-, medium- and heavy-duty trucks and buses. Daimler AG owns 89.29% of MFTBC shares and various Mitsubishi group companies own 10.71% of MFTBC shares. MFTBC is an integral part of the Daimler Trucks Division of Daimler AG.