May 5, 2015
Stuttgart / Las Vegas, Nevada – Today Daimler Trucks became the world´s first manufacturer to be granted a road license for an autonomous heavy-duty truck. The first journey in the so-called Freightliner Inspiration Truck, which took place on US highway 15 in Las Vegas, was made by Brian Sandoval, Governor of Nevada, and Dr. Wolfgang Bernhard. The truck is equipped with the intelligent Highway Pilot system for autonomous driving. The state of Nevada licensed two Freightliner Inspiration Trucks for regular operation on public roads. Daimler Trucks is the global leading truck manufacturer and, with the Freightliner brand, also the biggest producer in the U.S. 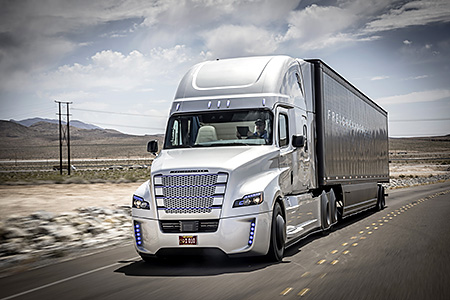