October 26, 2015
Kawasaki, Japan – Mitsubishi Fuso Truck and Bus Corporation (MFTBC), one of Asia’s leading commercial vehicle manufacturers, cooperating with Daimler India Commercial Vehicles Pvt. Ltd. (DICV) under the umbrella of Daimler Trucks Asia (DTA), has launched its new FUSO truck range in South Africa. The light-medium-duty truck FA, is the first of the new FUSO range to be introduced in the market.
The new FUSO family complements the existing range of FUSO trucks that has been sold in South Africa since 2002. Those heavy-duty, medium-duty and light-duty FUSO trucks come from MFTBC’s Kawasaki production. They are sold and marketed by Mercedes-Benz South Africa Limited (MBSA), a100% subsidiary of Daimler AG.
Michael Kamper, Senior Vice President and Head of Marketing, Sales and Customer Services of Daimler Trucks Asia states, “Our all-new FUSO trucks have already gained a great reputation in other African markets, thanks to their robustness and fuel efficiency. I am convinced that they will also be successful in South Africa and help us to further enhance our market-share”
The light-medium-duty truck FA, is produced at the state-of-the art DICV plant in Chennai, India and exported from there to South Africa. 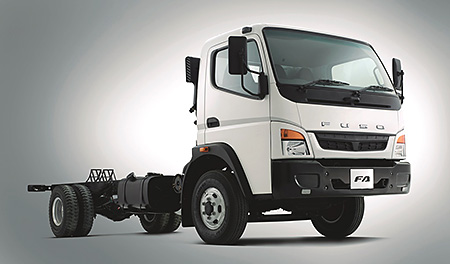 FA light-medium-duty truck
More choice for customers; with the new FUSO range
These newly developed robust and fuel-efficient trucks meet our ever increasing customer expectations in growth markets, and reinforce FUSO’s presence in the world.
The all new range of FUSO trucks comprises 5 models in total, 2 light-medium-duty models ( 9-16 tons GVW FA and FI) and 3 medium-heavy-duty models (16-49 tons GVW FJ, FO and FZ), providing more choice to our customers.
Since the start of production, these FUSO trucks have been launched in and exported to 13 countries in Asia and Africa. Last year FUSO range was launched in Indonesia- FUSO’s largest export market and Southeast Asia’s largest economy.
The all-new FUSO truck range is manufactured at the Oragadam plant in Chennai, India, by MFTBC’s partner organization DICV, a 100% Daimler AG-owned subsidiary. The trucks have been rigorously tested and assessed under the most strenuous driving conditions to ensure maximum reliability.
Mitsubishi Fuso Presence in South Africa
Mitsubishi Fuso delivers a complete line of trucks for the South Africa market ranging from 5 tonns up to 26 tonns gross vehicle weight (GVW). These vehicles are being assembled at the MBSA’s East London Plant from knocked-down kits shipped from Japan. The all-new robust FA is produced in new Daimler Trucks Asia plant in Chennai/India and shipped as a completed truck to South Africa. With the new range to the product line-up, we will offer more choice to the customers.
About DICV
Daimler India Commercial Vehicle (DICV) is a 100% subsidiary of Daimler AG, Stuttgart, Germany. It currently produces and sells a range of 9 to 49 ton trucks for the Indian market, as Bharat Benz, and Fuso trucks for exports to markets in South East Asia, Africa, the Middle East and Latin America. DICV’s state-of-the-art manufacturing facility at Oragadam, near Chennai houses its truck and bus plant. It is the only Daimler Truck plant worldwide to produce trucks and buses, engines and parts for three brands – Mercedes Benz, BharatBenz and FUSO.
About MFTBC
Based in Kawasaki, Japan, Mitsubishi Fuso Truck and Bus Corporation (MFTBC) is one of Asia’s leading commercial vehicle manufacturers. In 2014, the company sold a total of about 174.595 vehicles including light-, medium- and heavy-duty trucks and buses, a 1.7% increase over the previous year. Daimler AG owns 89.29% of MFTBC shares and various Mitsubishi group companies own 10.71% of MFTBC shares. MFTBC is an integral part of the Daimler Trucks Division of Daimler AG.