The demonstration is part of the government’s “Future Strategy 2017”, which aims to take advantage of innovations such as Internet of Things, big data, AI and robotics, and to apply them across all industries. In the commercial vehicle sector, this includes large-scale truck platooning on expressways. Platooning considerably decreases air resistance, hence increasing fuel efficiency and allowing a reduction in CO2 emissions. It also tackles the pressing issue of driver shortages in Japan.

MFTBC, in collaboration with other domestic truck manufacturers, is participating in this project, which is led by Japan’s Ministry of Economy, Trade and Industry (METI) and Ministry of Land, Infrastructure, Transport and Tourism (MLIT). The test utilizes CACC (Cooperative Adaptive Cruise Control) technology that keeps the distances between the vehicles constant by acquiring acceleration and deceleration information on the surrounding vehicles through an inter-vehicle communication system.

Taking part in the demonstration is Fuso’s flagship heavy-duty truck, the new Super Great, which was launched in May 2017. The Super Great is equipped with an inter-vehicle communication device and a prototype electronic control unit. It also comes with “Proximity Control Assist”, which has automatic stop and start functions in addition to auto cruising, allowing the vehicle to maintain an appropriate distance between it and other vehicles.

Aiming to commercialize autonomous driving technology in 2025, the Daimler Trucks division announced the “Mercedes-Benz Future Truck 2015” concept, which was equipped with autonomous driving functions in 2014, a world’s first. Daimler Trucks released the automated driving technology “Highway Pilot” in Germany in 2015, and in 2016 Daimler participated in the widely covered European Truck Platooning Challenge hosted by the Dutch government, which demonstrated platooning with three heavy-duty trucks traveling in a caravan on public roads in Germany and the Netherlands.

Daimler has also developed the “Highway Pilot Connect” system, an autonomous and connected driving technology which uses cameras mounted on the body of the vehicle as well as radar. 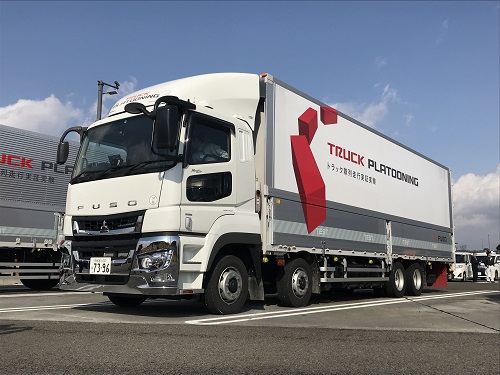