The handover ceremony on July 6 was, among others, attended by representatives of the Portuguese government and foreign dignitaries. MFTBC was represented by Kazuo Matsunaga, Chairman of MFTBC: “The eCanter is a sustainable alternative to conventional trucks for local governments to lower noise and emission pollution in urban areas. From the beginning, we received crucial support from the Portuguese government during development and for conducting pre-series customer tests with the eCanter. We are hence delighted and proud that today, we can hand over first eCanter units to the municipality of Lisbon.”

With the FUSO eCanter, Lisbon aims to contribute to the reduction of noise and emission pollution caused by conventional commercial vehicles in urban areas. The vehicles will be in operation with ten parishes selected by the Lisbon Town Hall and will be primarily used for municipal gardening and waste disposal operations. These parishes are: Arroios, Avenidas Novas, Belem, Estrela, Misericordia, Parque das Nacoes, Penha de Franca, Santa Maria Maior, Santo Antonio and S. Vicente. During extensive customer trials in Portugal and Germany between 2014 and 2017, the cities of Lisbon, Sintra and Porto have already successfully used the pre-series version of the eCanter in daily transport operations.

Mitsubishi Fuso, under the umbrella organization of Daimler Trucks Asia, is widely regarded as a pioneer in the electrification of commercial vehicles. With a rich history in developing alternative drivetrains, including the Canter Eco-Hybrid since 2005 as well as presenting the E-CELL at the International Motor Show (IAA) 2010 in Germany, Mitsubishi Fuso has become a frontrunner in offering sustainable solutions to its customers worldwide. Since its global launch in 2017, the FUSO eCanter is now in operation in six major cities around the world, namely Tokyo, New York, Berlin, London, Amsterdam and Lisbon.

Mitsubishi Fuso produces the eCanter for the European and US market at the Tramagal plant in Portugal, where the electric truck has been fully integrated into the same production line as the conventional Canter, one of the best-selling trucks of Daimler’s commercial vehicles portfolio. Since 1980, the Tramagal plant has produced over 200.000 Canter and looks back on more than 50 years of production. The plant is an important element of the Portuguese economy and an excellent example of Daimler Trucks’ global footprint, cooperating closely with its sister plant in Kawasaki, Japan. 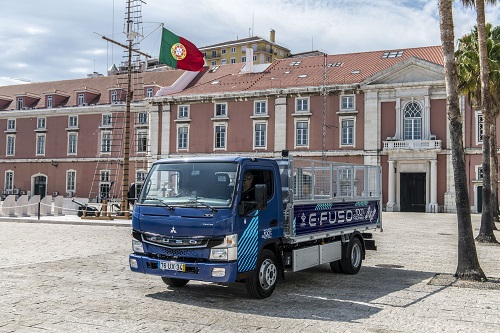