The handover ceremony took place on July 25 in Taoyuan in the northwest of Taiwan at Guo Pu Concrete Industry Co. Ltd., the customer receiving the 10,000th vehicle. DTAT hosts a celebration event for every 5,000 vehicles handed over to a “lucky customer”.

Joe Wong, CEO of DTAT, said at the event that “Taiwan is one of FUSO’s first international markets with a strong presence since 1958.  Since then, we have stepped up our commitment to Taiwanese customers with the setup of DTAT. Today, we are especially proud to hand over our 10,000th vehicle to our loyal and valued customer since DTAT started operations in 2017.” 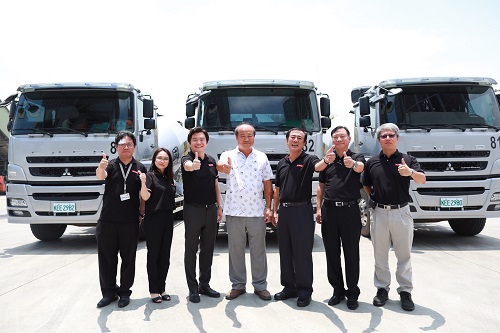 FUSO has a rich history in Taiwan. In 1936, FUSO’s B46 light bus entered the Taiwanese market and local distributorship was established in 1958, since then growing to become FUSO’s second largest export market in Asia after Indonesia. Today, FUSO is a leading commercial vehicles brand in Taiwan and market leader for over 25 consecutive years. With over 30 sales and service outlets across Taiwan and over 70 outlets where FUSO vehicles can be serviced, FUSO has the most extensive sales and service network coverage in Taiwan. DTAT’s dealer network will continue to expand and is developing a next generation of workshops in Hsinchu and Luzhu in Northern Taiwan.

DTAT was established in July 2016 (start of operations in 2017) to consolidate FUSO wholesale activities to further enhance customer dedication in Taiwan. The joint venture between MFTBC and Shung Ye Trading Co., a leading player in the Taiwanese commercial vehicles market, is the sole distributor of the FUSO brand in Taiwan and responsible for the exclusive import and wholesale businesses for the entire range of FUSO products, including light, medium, heavy-duty trucks, as well as light and medium-duty buses.