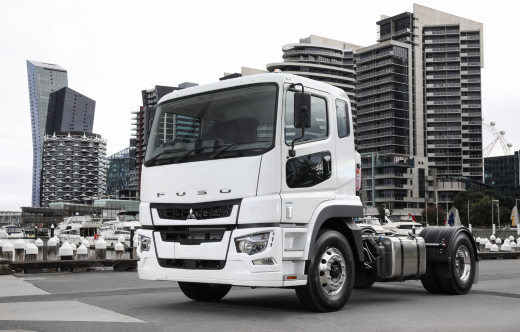 The Fuso brand’s newest flagship truck, known as the Shogun in Australia and New Zealand, complies with Euro-VI emission standards and comes equipped with the OM470 11-liter common rail engine that allows for improved fuel efficiency in comparison to the previous model. It also features the 12-speed “ShiftPilot” automated manual transmission (AMT), which ensures a smooth drive unaffected by changes in cargo load or road conditions. Extensive tests covering nearly 50,000 km were conducted in Australia to confirm the vehicle’s fuel economy and the performance of its advanced safety features under local conditions. These safety features include the “Proximity Control Assist” adaptive cruise control technology with automatic start and stop functions, the Lane Departure Warning system, and the enhanced “ABA4” emergency breaking system that can now detect pedestrian movement.

Driver comfort was a main focus in the development of this model; all vehicles are installed with integrated seatbelts that allow for better fit regardless of seat position. The newly added creep function, which is activated by releasing the break pedal, reduces demands on the driver in congested traffic. Special care was taken to optimize shift mapping in the development of the Australia and New Zealand-bound vehicles, taking into account shifting behavior unique to drivers in the two markets. Furthermore, improved vibration reduction and cushioned seating supported by air-suspension — ergonomic features preferred by Australian drivers — mitigate fatigue on long-distance hauls and journeys over rough terrain.

The new Super Great was launched in Japan in May 2017, before its international debut in Hong Kong the following August. Since then, MFTBC has brought its most advanced heavy-duty truck to several more markets in the Asia-Pacific region, namely, Singapore, and, most recently, New Zealand, where in-market field tests were also conducted.

Daimler Trucks Asia at a Glance
Daimler Trucks Asia (DTA) is an organizational unit that jointly operates Mitsubishi Fuso Truck and Bus Corporation (MFTBC) – an icon of the Japanese commercial vehicle industry with more than 80 years of history – and Daimler India Commercial Vehicles (DICV), a young challenger in the Indian market.  DTA has a strategic business model that allows its group entities to collaborate in product development, production, exports, sourcing and research activity to provide the best of value products.