With the clatter of the garage door rising, a wave of grey morning light floods the otherwise quiet warehouse at FUSO’s Kitsuregawa Proving Grounds, revealing a collection of five vintage workhorses. Through the dancing dust strides Kei Tashiro. Placing his well-worn toolbox carefully on the concrete floor, he opens up the engine compartment of the 1970 V-Canter.

With the patter of rain on the corrugated warehouse roof and the hum of the industrial air conditioner, he climbs into the driver’s seat, primes the ignition. With the turn of the key and a few cranks of the engine, the truck lets out a throaty growl and roars to life, and an affectionate smile breaks out on Kei’s face. 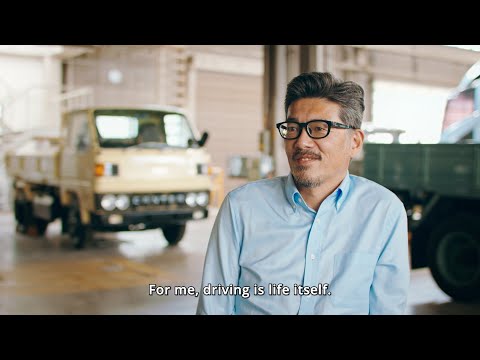 It’s moments like this that the former rally mechanic, award-winning motorcycle builder and motor journalist lives for. Powered by a self-styled philosophy of “boundary-less” behavior, Kei refuses to be bound by the invisible constraints of age or job titles.

This keen sense of adventure has served as an asset both on the clock, as a member of FUSO’s marketing and communication team and in his many off-the-clock hobbies, such as flat-track motorcycle racing. From breathing life back into vintage trucks to penning bold new concept vehicles, Kei is the embodiment of authenticity and persistence, dedicated to keeping tradition alive with his never-not-hungry attitude.

IGNITING A LIFELONG PASSION  Though born and raised in the beach town of Kamakura, south of Tokyo, it was in a cabbage patch in landlocked Nagano Prefecture where a single turn of the ignition sparked a lifelong passion for Kei. “I was ten years old when I sat up front in my friend’s dad’s car. The thrill of the engine roaring to life and the propulsion of releasing the clutch have stayed with me for life.”

That life-changing turn of a key kick-started an art-school education, stints as a rally mechanic and amateur motorcycle racer, building his own brand and receiving industry acclaim. It is out of these years of experience in which a protective instinct for motor vehicle heritage has grown, as evident in his painstaking renovation of vintage FUSO trucks.

AN INTEREST IN VINTAGE  The Kitsuregawa Proving Ground in Tochigi Prefecture, north of Tokyo, houses a number of vintage Mitsubishi Fuso trucks. In the early 2000’s, Kei explains, a team of passionate FUSO employees began a revival project of sorts, volunteering their free time to bring the forgotten FUSO’s back to life. Now complete and the project disbanded, the vehicles are once more in need of care.

Soon after entering the company, Kei got wind of these retired workhorses and followed the trail to the project’s original members in hopes of continuing the work.

Today these trucks, whose existence was once only known to a handful of employees, have now been shared across the globe through social media, thanks in no small part to Kei and his dedicated predecessors.

“There is a saying in Japanese of onko chishin (learning from the past to enhance and refine your view of the future). The philosophy and spirit of the company are alive and well in these old trucks and we can discover a lot about the challenges and ingenuity of our predecessors by working on these vehicles.”

“Motorcycles have been an important part of my life. As well as a rider, I am a custom builder and motorcycle journalist.” For his own custom builds, Kei does it all—from building tanks and fenders and welding frames to handcrafting leather saddles and paintwork—breaking down the boundaries between art and mechanics.

He owns two Harley-Davidson Sportsters, several dirt bikes and two flat track racers. “I began flat track racing when I was 51 years old and am very focused on it now.” Kei explains there is a sweet simplicity in riding motorcycles. “It is just me and the engine—there is nothing between us.”

POWERING THE FUTURE  The Kitsuregawa Proving Ground site also houses several concept vehicles that, in Kei’s own words, appear to be “from a parallel universe.” These concept trucks provide a stark contrast to the vintage vehicles they sit next to, but in the spirit of onko chishin, a line of FUSO history and philosophy connects them.

Kei played an important role in the creation of Athena, a disaster rescue concept vehicle displayed at Tokyo Motor Show in 2019. Kei helped turn ideas into sketches and a 4×4 Canter into a striking show-stopper that demands your attention. “I was involved in the designing of Athena’s profile and down to the smallest details.” Kei explains, “Japan is a country prone to natural disasters, and the Athena project demonstrates the critical role truck manufacturers play when disaster strikes.”

Features of the vehicle stem from Kei’s experience as a support driver to Kesennuma, a coastal city in Miyagi Prefecture that was ravaged by the Great Tohoku Earthquake and Tsunami of 2011. “My experience of driving on those damaged roads and sustaining many punctures went into the design for Athena.”

With seemingly equal parts plasma and petrol coursing through his veins, Kei carries a refreshing fluidity in a world of ever-increasing pressure to pigeonhole and solidify. For him, hard work and curiosity, a hunger for adventure and an open mind adaptable to change are key to breaking down boundaries and forging discoveries. ■